This year was my fifth time participating in the Global Game Jam and my third time being at my favourite jam site at WERK1 in Munich. Every time I’m going there I’m surprised at how rapidly the area is growing. This year there was a huge new skyscraper being built and also a giant Ferris wheel?

The theme was “Repair” this time. I pitched a game idea about rebuilding a text from fragments by reordering them. At first, I planned on implementing this game system alone and asking all of the other game jammers to contribute a little story or a poem for the actual content. But two people ended up wanting to help me, so we changed the idea to something a little bigger and more specific: A game where you have to make sense of the fragmented diary of a detective. With lots of pretty illustrations.

Laura (check out her games on itch.io) did all of the graphic stuff and it ended up amazing. She aimed for a combination of the art deco aesthetics of the 20s and the film noir feel of those classic criminal movies: 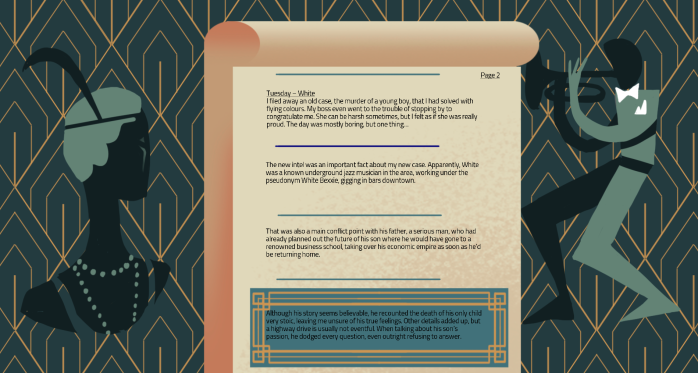 Gabriel did all of the writing. I was impressed with how fast he came up with a full story that was about 4 pages long. He then continued to make a paper prototype, and it turned out that solving the story correctly was really hard. So he had to cut down and make the story a lot simpler, so players would not be overwhelmed. At the same time, he had to keep the story engaging, avoid any logical inconsistencies and make it work with this unconventional way of telling it. Hard stuff!

A part of the original plot made Laura and me a little uneasy. It’s difficult to tell someone that you don’t really agree with something in their writing, so I admired Laura for her courage to tell Gabriel about it and to do it without hurting any feelings.

This was the first game jam where I did all of the programming entirely by myself. So it was possible for me to choose which engine to use and I decided to go with Godot, a pretty new open-source engine that I wanted to try out. And I was pleasantly surprised! There weren’t any features that I was missing, it was very easy to understand and most importantly: It was blazingly fast on my 7-year-old laptop.

Unfortunately, I made some design mistakes in the user interface logic and had to spend a lot of time getting it to work correctly. So there were some features that I got not around to including, which made me a little sad.

But overall it was a great game jam. I particularly enjoyed playtesting the board game “Remember When That Didn’t Happen?“. It’s incredibly fun and an excellent way of getting to know the people you play with a little better. Both of the designers were also very well versed in using Godot and helped me out when I was stuck with something.

It’s always a little hard to sleep at WERK1 because it’s right above the infamous “Willenlos” club and there is usually some construction work being done that will wake you up in the morning. But this year I slept surprisingly well, despite being right next to a fridge. Maybe the monotonous hum helped me to rest well… 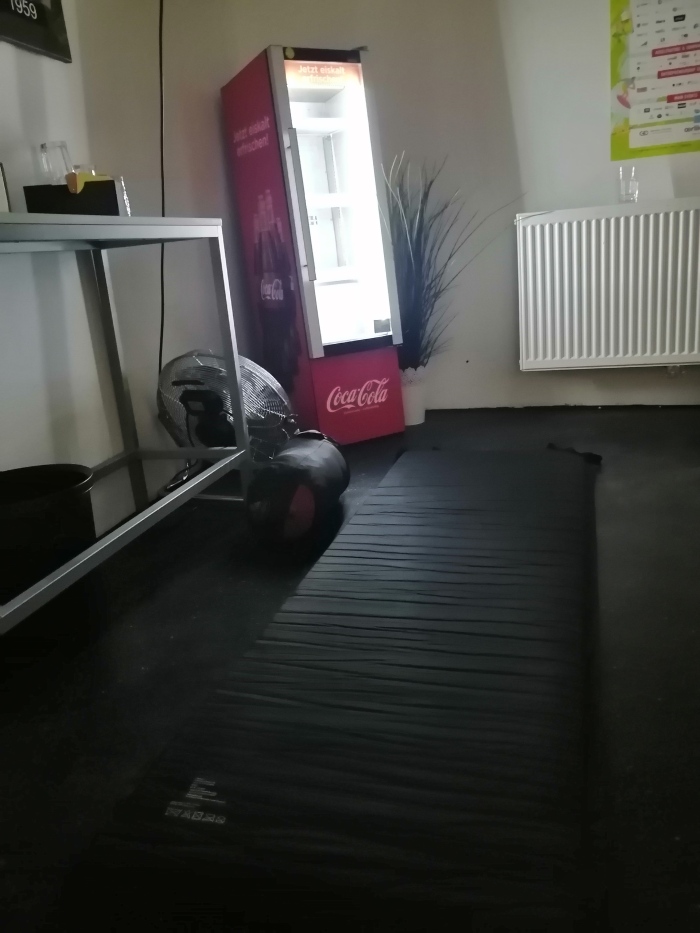 By next year’s global game jam, I will have to take care of a toddler, but I hope I will find a way to participate regardless. Maybe someone wants to host a jam location in Augsburg?